Bed bugs belong to the family of insects known as Cimicidae. All members of this family feed on blood which they require to develop and reproduce. There are a number of closely related species in this family that feed on birds, bats and other animals. However, the species most adapted to living with humans is the common bed bug, Cimexlectularius, which is found worldwide. 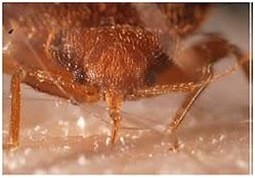 Bed bugs are often present for weeks or even months before a single bug is ever seen by the occupants of an infested structure. They hide in cracks and cervices, often in groups. However they also will disperse away from the bed and can live between or beneath floorboards, carpeting, under decorative moldings, in or under furniture, behind picture frames, inside wall voids, etc. There is virtually no crack too small for this insect to occupy. It is from these secluded cracks and crevices that the bugs emerge during the nighttime hours to feed on their sleeping host. The bites are typically painless and often go undetected. 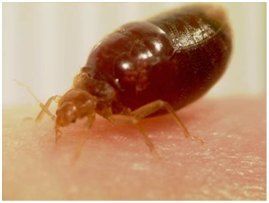 When bed bugs bite, they insert their long beaks into human skin and suck out the blood. A feeding may take a couple of minutes or as many as ten minutes. The bugs typically feed on ankles, face, hands, arms, neck, the lower half of the body, or place on the body where flesh is exposed. When the bug bites, it injects an anesthetic through its saliva. This anesthetic numbs the pain. Therefore, most often people do not know when they are being bitten. Once fed, the bug crawls back to its hiding place.

Days after being bitten, many people develop a welt or itchy bump on the skin later. Some people do not realize that this physical mark is from a bite. Instead, people commonly assume they have been bitten by a mosquito or a flea.

There are a few warning signs that a certain bite may be caused by them. Take note of any of the following:

Most people are oblivious to being bitten, and this makes it difficult to detect their presence at all. Regardless of whether a person detects a bite, the bugs can drink as much as 6 times its weight. After a feeding, the bug will look visibly larger and swollen. 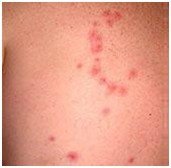 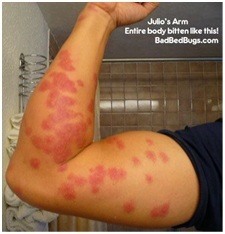 After a bite, people’s bodies respond to bug bites in different ways. Some may not have a reaction to the bite at all, whereas, others may exhibit a tiny bite mark on the skin. Still others will have large, itchy welts as a result of a bite. However, bite marks and welts often take a few days to show up on the skin. Many people mistake these bites for flea, tick or mosquito bites.

In rare cases, some people have experienced an allergic reaction to bites. Anyone who has an allergic reaction to them should certainly seek immediate medical help. If bitten, the bite should be washed carefully with soap and water. People who suffer from itching and irritation from bites should not scratch. Instead, they should use over-the-counter creams and antihistamines. These products can help minimize itching and irritation. Warm compresses held against the skin can also help ease irritation. If the wound shows any signs of infection, seek emergent healthcare treatment. Signs of infection may include tenderness or pain around the wound and discharge, especially if it is yellow, white or green in color. Some people believe that bed bugs are only found in developing nations, but that is not true. They are found all around the world, in Africa, Europe, Asia, North America and South America. Another common misconception is that they are only found in cluttered and/or filthy houses and motels. That is not true either. They have been found at exclusive resorts and well-respected hotels. In fact, common places where they’re found are as follows:

They are most commonly found in and around beds and other areas people sleep. As mentioned above, they may infest dorm rooms, apartment complexes, shelters, motels, and even public transportation systems such as buses and trains. Some people believe that the bugs are limited to beds, but that is not true. They can also live in couches, behind picture frames, in chair cushions, behind electric sockets and in baseboard crevices, basically anywhere around a home or dwelling.

The bugs generally hide during daylight hours and then come out at night to feed. However, they have been known to surface at any time of the day, especially if they are hungry. After feeding, they usually hide in places such as headboards, bed frames, mattresses and bed springs, underneath wallpaper and inside dressers.

They do not generally travel far from people’s sleeping and lounging areas, but they have been known to move more than 100 feet at night when venturing out to feed. They are also notorious for burrowing and squeezing themselves into the smallest spaces.

Though the bugs can survive in clean environments, spaces that are cluttered or messy generally create a habitat in which they can easily find shelter. In terms of temperature, the bugs and their eggs can live in extremely hot and cold temperatures if they have time to adjust to such conditions. However, they do prefer to live in moderate temperatures of around 70 degrees Fahrenheit.

In the primary stages of infestation, they are generally found around a mattress because they come out at night and feed on human blood. However, as the infestation progresses, the bugs spread out and move into and under other surfaces. When searching, it is important to look inside and underneath every surface and crevice. They like dark, secluded places. When looking for the bugs, it is important to know that the bugs typically hide in the following locations: 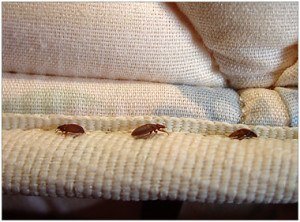 Learn how to avoid, detect and eliminate bed bugs…

We deeply sympathize with our clients during this difficult time and are dedicated to the safety of your residents and staff. EcoBarrier helps protect them through our anti-viral, anti-bacterial, anti-fungal, immune boosting properties. Even more, we eliminate the need for outside exterminators to come on site, reducing penetration opportunities for the COVID-19 virus.